Evapotranspiration (ET) plays a key role in agriculture planning and water resources management, hence the simulation and pattern studying of this parameter has been a major field of interest for researchers. Considering the data repeatability of evapotranspiration, The Box-Jenkins method is an appropriate method for ET modeling. In this study, the mean monthly values of evapotranspiration for five stations of Kermanshah province, Iran was calculated by FAO 56 Penman-Monteith equation using a 21 years period meteorological dataset. Then, a time series analysis was carried out to explore the variation of the evapotranspiration series. Finally, using SARIMA stochastic model, the corresponding parameters of normal condition, stochastic, white noise, whiteness of the residual, and the final evapotranspiration patterns for the each station were obtained. The final evapotranspiration patterns were obtained as SARIMA (2,1,0)andtimes;(1,1,1)12, for Kermanshah station, SARIMA (3,1,1)andtimes;(1,0,1)12 for Kangavar, SARIMA (2,1,2)andtimes;(1,1,1)12for Sar pol zahab station, Ravansar station SARIMA (3,1,1)andtimes;(1.0.1)12 and Eslam Abad Gharb station SARIMA (1,1,1)andtimes;(0,1,1)12. Besides the selected models were used to predict the evapotranspiration of 12 months which had not been used in model development stage (Training) and the results were compared with the actual values. The corresponding values of RMSE and r indices for year 2009 were 0.38 mm and 0.99 in Kangavar station, 0.37 mm and 0.99 in Sarpol-Zahaband 0.40 mm and 0.99 in Kangavar respectively, which indicated a better performance in these three stations comparing to Ravansar and Eslam Abad stations with less satisfactorily results. 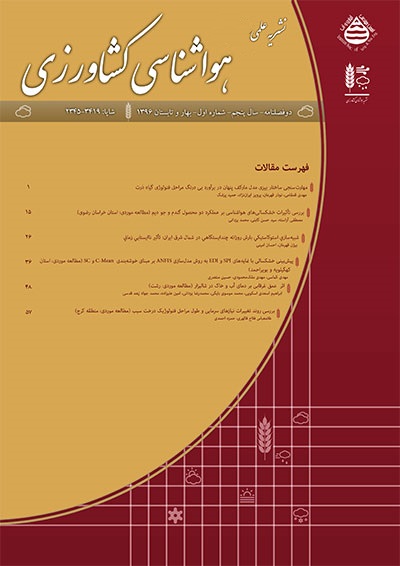